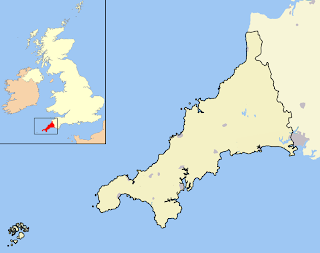 I have been staying a long way away from Edinburgh lately, as the map shows, and I won't be in Edinburgh much over the summer either - so there isn't much blogging going on. I'll leave the blog up for now, in case it's of any interest to Elephant House readers, and will either come back to it one day or make a decision that my Elephant House blogging days are over...
Posted by Mike Stocks at 10:44 4 comments: 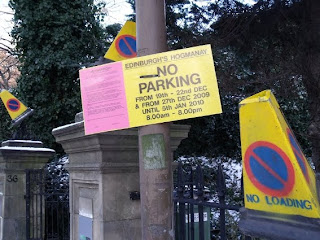 Labels: 1 minute from the cafe, I see, people

I talk to... NADIA ALTOR 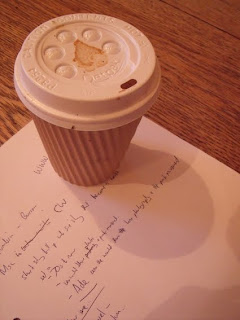 "On a brick wall in a back garden just north of Birmingham, visible from the train, is a painted-on goal post with the words HIT IT AMADEEP daubed inside in thick black capitals. I know this because I wrote it. Amadeep was my little brother, and I wrote it the summer before he died."

Don't you think that sounds like a great first sentence for a novel? Evocative and distinct, it hooks the reader immediately. It's actually the first sentence of an excellent short story by Elephant House staff member Nadia Altor, who graduated from Edinburgh University's Creative Writing MSc recently. You can read this story and others here, as well as extracts from Vanguard, a novel telling the story of the Carson family in a shipbuilding town as filtered through punk-rock, social breakdown and the mysterious voyaging of a nuclear submarine...

I have a theory that nearly all quality writers, at the beginning of their careers, start off belonging to one of two groups: strong in language but weaker in story-telling, or strong in story-telling but weak in language. Nadia reckons that she's probably closer to the first group, and she certainly has the natural gift of phrase-making, it's apparent in all her stories; but I wouldn't be surprised if she has the story-telling skills required by novels too. We'll have to wait till Vanguard is published to find out...

Like the admirable Mystery Mr X (who, having read all available impenetrable literature in Europe, has departed for South America for a month to read further impossibly obscure tomes) Nadia prefers to go unphotographed, hence the artistic photograph of her coffee cup resting on my interview notes...
Posted by Mike Stocks at 20:21 3 comments:

I talk to... VOLCANO CLIMBING JONNY 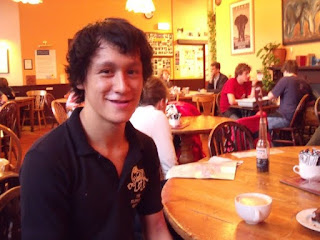 Some people support charity the hard way, by demolishing small ornaments, while others take the easy way out by climbing three active volcanoes in a week and raising thousands of pounds in the process. Elephant House staff member Jonny and cafe owner David belong to the latter group. Come November 10th they'll be in the Phillipines tackling three of them there hot mountain type things (I got a 'B' in my Geography GCSE).

The actual volcanoes are the not insignificant Taal (ongoing signs of unrest), the imposing looking Pinatubo (which in 1991 produced the second biggest volcanic eruption of the 20th century) and the whopping-great-big scary-looking steam-spouting Mayon (see photograph; eruption imminent, level 2 alert in place due to increased activity in June and July of 2009 - nice timing guys...)

About twenty people are undertaking the adventure. Their target (apart from evading any potential Pompeii-style outcome) is to raise £50,000 for the Scottish Filipino Charity, an organisation that funds the education of underprivileged children in the Phillipines. If you visit the Elephant House in Edinburgh it would be GREAT if you could spare a few pounds for this cause... And if you're reading this from afar, it would be GREAT if you could donate via the charity's website.
Posted by Mike Stocks at 15:30 No comments:

Labels: I talk to

I break... AN ELEPHANT 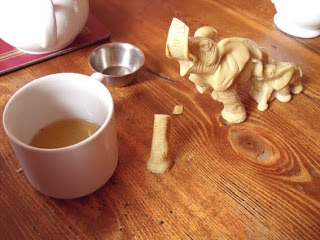 I spin round in the cafe, my bag lurches out from my side, and an elephant tumbles from its ledge to the floor. Elephants have four legs, but this one now has three. Under the stern gaze of elephant-loving tourists I crawl around on the floor looking for the missing elephant limb, knowing that I am a bad person: the elephant was for sale, with all monies going to the The Scottish Filipino Charity, which sponsors the education of children in the Philippines. I have butchered a child-educating charity elephant.

I realise I must buy this three-legged elephant or kiss my reputation goodbye. I 'fess up to a member of staff and buy the creature for £5. I take it home. I put it on a ledge of my own. I like it. I ponder whether to glue its leg back on.

The Scottish Filipino Charity is an organisation that supports underprivileged children in the Philippines. In November Elephant House owner David and staff member Jonny are doing a sponsored climb of three Philippine volcanoes, in aid of the charity. To sponsor them, or to break your own elephant and then pay for it, speak to anyone in the cafe, or check out www.scottishfilipinocharity.org. More on this sponsored volcano climb soon...
Posted by Mike Stocks at 23:25 2 comments:

I talk to... RAJORSHI CHAKRABORTI and MYSTERY MR X 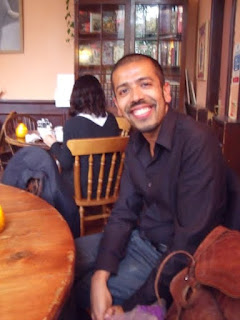 I know highly entertaining Indian novelist Raj from a couple of readings we've both attended. His first novel Or The Day Seizes You was shortlisted for a prestigious prize, and his second novel Derangements has recently been accepted for publication in the U.S.

Raj sweeps into the Elephant House hoping for some heavyweight literary discussion. This explains why he's looking not for me but mystery Mr X, a regular in the Elephant House who prefers not to be identified on account of a becoming modesty. Experiencing Raj and Mr X talk literature is like being pleasurably happy-slapped by Jacques Derrida wielding a studded copy of Middlemarch. With relish they set about discussing all the books ever written, while I chip in with my own distinctive slant on literature (“Um, no, haven't read that”; “Or that”; “Er, who?”)

Mr X goes to the toilet - even enigmas have their down-to-earth aspects - and Raj asks me whether a good novel needs to be all trees, or trees and lawn; in other words, does incident need to be set off by reflection, or can it be packed in like a forest? I say something highly intelligent about trees, lawns, valleys, mountains, glaciers. Just want to put that on the record.

Raj is a sentence maker - the language of his novels is endlessly rich and fecund, and hearing him read his work aloud is one of the most enjoyable experiences a reading can provide. He writes short stories too...
Posted by Mike Stocks at 17:03 No comments: 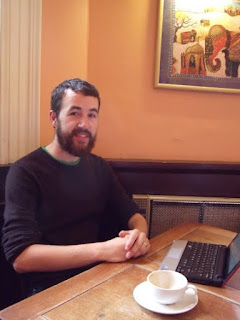 I often see Josiah writing in the Elephant House, and he has the same rather classy looking netbook as me, and he has a beard...

Surely Elephant House + netbook + beard = writer? But when I talk to him, I find out he's doing something much more useful. He's a key player in The Grassmarket Community Project (also called The Grassmarket Mission), which is a wonderful charity dedicated to getting alongside people who are poor, marginalised, excluded, homeless, or struggling with addiction or mental illness. The ethos is based around trying to build community by finding ways of blurring the lines between the ‘marginalised’ and those who overlook them. There are all kinds of activities - cooking, art, woodwork, gardening, drop-in centre - run by members of the community, and all kinds of alliances with other socially proactive groups. It's a big deal: in total Josiah is helping to facilitate 200+ volunteers in Edinburgh in the provision of support and opportunities for numerous people who are looking to address the issues that are holding them back.

Josiah's always looking for more volunteers, and in one way or another the charity is involved in dozens of fantastic projects within a minute or two's walk from the Elephant House, so explore their websites here and here if you think you might like to get involved...
Posted by Mike Stocks at 14:58 No comments:

Labels: 1 minute from the cafe, I talk to, people 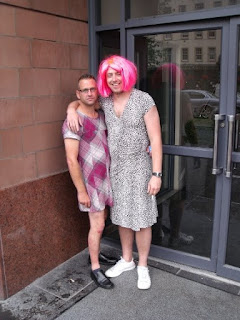 Cycling back from the cafe today I see men in dresses outside a bar in the Grassmarket. It's not unusual to see men in dresses in Edinburgh - for thousands of years Englishmen have celebrated their stag nights by coming to Edinburgh and putting on dresses and drinking ten pints - but these two are very fine examples so I ask if I can take a picture. At first they are a bit shy and unsure - no girl likes to seem easy, after all - but eventually I win them over. Soon they urge me to go into the bar and take more photos of men in dresses ("there's some terrible sights in there"), but I happen to be wearing a bright yellow fluorescent cycling jacket and waterproof trousers, and don't fancy my survival chances in a bar full of well-oiled stag-nighters.
Posted by Mike Stocks at 16:21 4 comments:

Labels: 1 minute from the cafe, I see, people 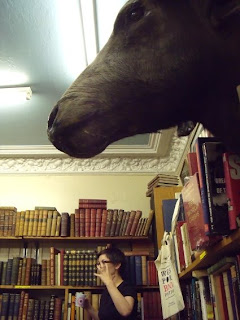 Westport Book Festival runs from 13 to 16 August and is based in and around characterful Westport Street in Edinburgh. The area is known locally as the Pubic Triangle, because of its isosceles of lap-dancing joints, but strangely "The Pubic Triangle Book Festival" didn't attract many sponsors.

The programme launch party took place on Saturday night at the fine second-hand bookshop Edinburgh Books, with Directors Hannah Adcock and Peggy Hughes making pithy speeches to a packed shop under the benevolent gaze of a water buffalo called Clarence...

To mark the bosomy aspect of the festival's location ("Edinburgh's Soho - a heady mix of books, bespoke-tailoring, booze and bosoms") there were cakes in different bra sizes: A, B, C, D and Double D. Double D was a lot of cake. I went for a delightful B, but that doesn't mean anything. I like all sizes of cake. 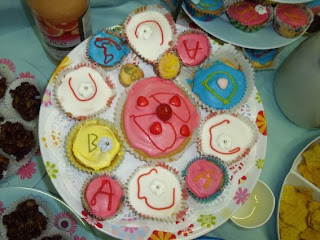 Only slightly more important than the bosoms and the cakes are the authors at the festival. I'll write more nearer the time, but big poetry beast Douglas Dunn kicks things off at 3p.m. on Thursday 13 August, and the legendary John Hegley closes the festival on Sunday 16 August at 8p.m. Between these two are a host of poets, novelists and non-fiction writers, including me and Gregory Norminton on Thursday 13 August at 7.30pm.

It's a small, newish, special festival going from strength to strength, and includes what promises to be the world's first 'Literary Twestival' for Twitter addicts...

For tickets, programme and bra-sized-cake queries, check out the festival website.
Posted by Mike Stocks at 00:55 1 comment:

Labels: 1 minute from the cafe, arts, I attend, poetry

I go to... the ANON relaunch 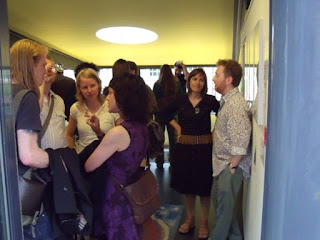 where: Scottish Poetry Library
when: 9 July

Anon ("the anonymous submissions poetry magazine") is something I set up in 2003. Recently it was taken over by new editors Colin Fraser (he tweets here) and Peggy Hughes (she blogs here), and the (re)launch party took place yesterday at the Scottish Poetry Library. Some ninety people came along to buy the magazine and drink the wine -- and steal the MP3 player in the Ladies' toilets that was transmitting Anon poems in a continuous loop (until stolen).

The new edition of Anon is beautiful -- you can buy it (or find out how to submit poems to the magazine) here.

"How does it feel to give away Anon"?" I was asked, and "Are you the biological father?" I explained that I had neglected Anon for a while - not enough nappy changes or trips to the zoo - so it's a relief to hand it on to far more capable parents. Colin and Peggy organised a tremendous relaunch that bodes well for the future of the magazine.
Posted by Mike Stocks at 08:31 No comments: